Thank you to everyone who came to our open night, it was so exciting to see so many new people in the gallery. We hope you pop down to the closing event on Friday 29th March (18:30) to find out who has won the People’s Vote prize.

Here are some images from the launch of the 3 Counties exhibition, including images of our winners and special guest, the Lord Mayor of Stoke-On-Trent Lillian Dodd. 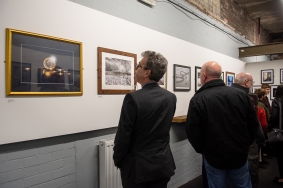 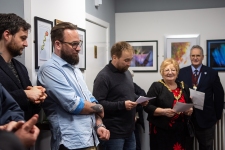 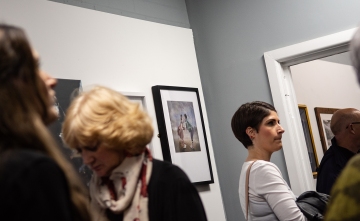 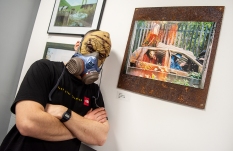 Working exclusively with analogue techniques and 35mm film. Dan works with a trial and error mentality, which often employs high-risk strategies in order to obtain his final outcome. His appreciation of material, surface and texture is consistent throughout his work and is particularly obvious within his unorthodox methods of presentation.

“The unpredictable nature of analogue photography parallels that of a ceramic kiln firing, it allows one to include an element of chance within the work, experimenting with variables beyond that of the artist’s control.”

I am an enthusiastic amateur photographer who has just acquired an ARPS from the Royal Photographic Society.  The photo “kissing clowns” was part of a panel developed for this distinction. The clowns were part of a pantomime produced by Cheadle Amateur Dramatic Society and I was fortunate to take photographs at the dress rehearsal.  Many textures and painted layers are added as well as new backgrounds to produce the final image using Photoshop.

3rd Place – Andrew Bell: A Frosty Start to the Day 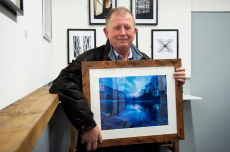 This image was composed from 3 bracketed pictures, taken at dawn on a bitterly cold January morning, a few wisps of mist escaped from the water and with no wind the reflections of trees and sky in the partly frozen water caught my eye.

I’m Tim Aldridge, 33 year old mature student from Staffordshire university, in my first year of a BA photography degree. I enjoy exploring places many people won’t see, whether it be in this country or abroad. I have a fascination with Chernobyl, the disaster and its history has been something that has peaked my interest for a number of years. This had lead to my traveling alone to the Ukraine several times to go and photograph the exclusion around the power plant.
This image was from this year’s trip in January; I had travelled with a friend and fellow mature student Cara out to the Chernobyl exclusion once again.  I walked into a room in a kindergarten, in Pripyat, and the doll was there, just staring at me. The image has had no digital manipulation, it has been taken straight from the camera.
If you are interested in my travels and seeing more of the experiences check out my Facebook page Life In The Shadows